JAminoglycosides are important antibiotics used in the treatment of many serious bacterial infections. Paromomycin (PA) or Amynosidin is an aminoglycoside which has not only antibacterial activity but also anti-protozoan. It’s a powerful oral agent for the treatment of infections, for example, Leishmaniosis and Tuberculosis. Most aminoglycosides are produced by microorganisms, while another part is semi-synthetic. PA is produced by Streptomyces riomosus var. Paramomycinus and inhibits both gram-positive and gram-negative bacteria. However, it is potentially toxic in the presence of other aminoglycosides

As all family members of Neomycin, PA is chemically composed of a cyclohexane, which is linked to a hexose and a pentose by the anomeric hydroxyl, and in turn, the pentose is linked to the anomeric hydroxyl of the hexose, as depicted in figure 1. PA does not have a defined NMR assignment or x-ray structure. But, REID & GAJJAR (1987) have published a tentative assignment for Neomycin B that is similar to PA.

PA shows some difficulties in the assignment, specially the very close chemical shifts in the hexoses, that cause superposition (figure 2). The Proton spectra show intense overlap, especially in the region of NH2 and OH. In contrast, all carbons can be distinguished nicely in the carbon spectrum; hence we believe we can obtain the complete assignment.

Due to the pharmacological potential, this study aims to use 1H and 13C 1-D and 2-D techniques of Nuclear Magnetic Resonance spectroscopy (NMR) for the complete assignment of Paromomycin, in an attempt to perform a 3D structure elucidation in the end. Our assignment of PA will be assisted by a revisited assignment of Neomycin B published in the literature in 1987. We have decided to revisit that assignment because of bogus proton assignments in the original publication. 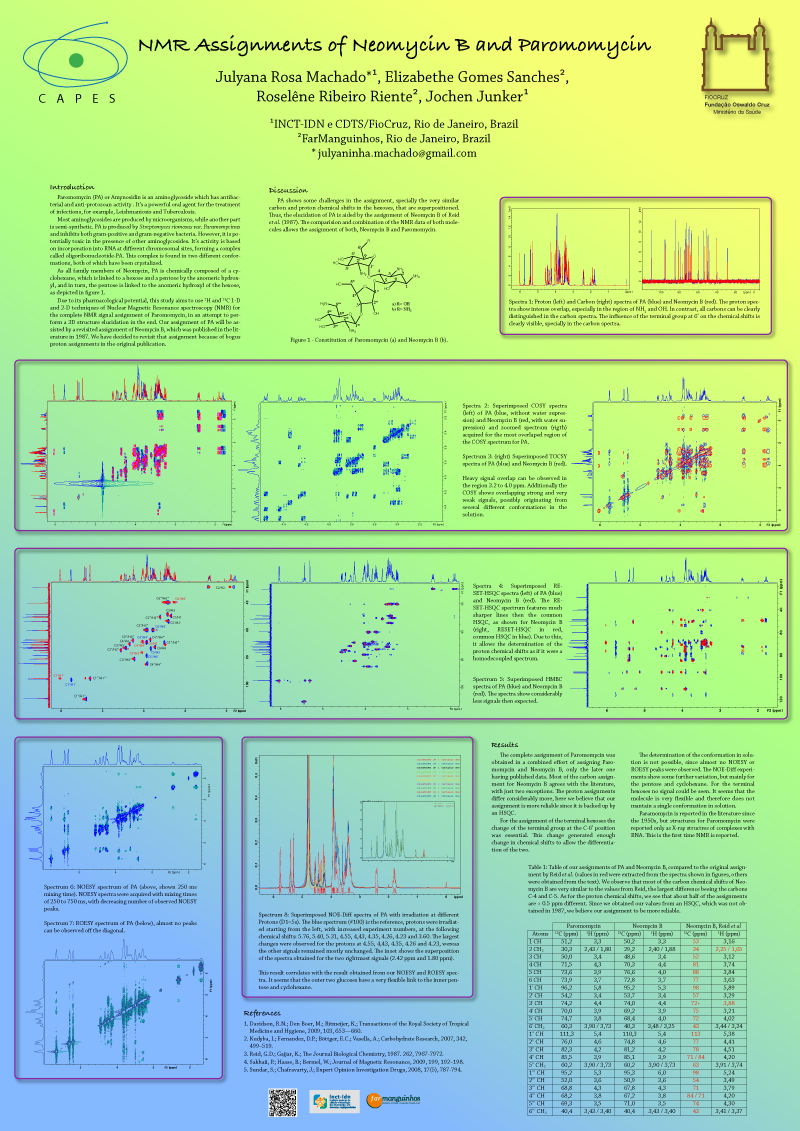